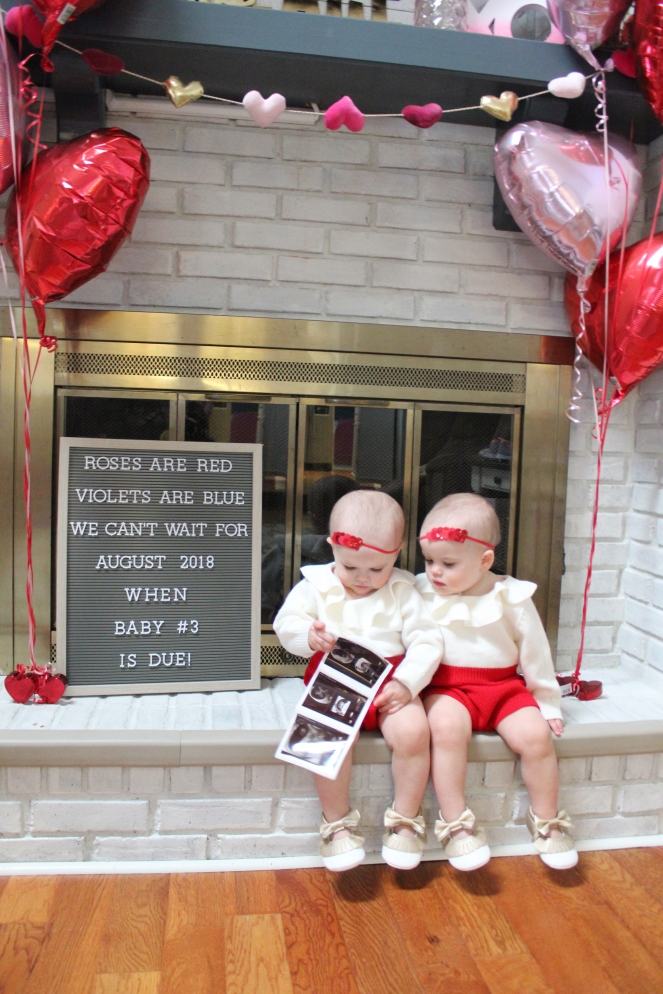 We are pregnant. Naturally. Even writing it down I still can’t believe it. Even after multiple pregnancy tests, blood draws, and ultrasounds; I still find myself doubting that it is true. I just never thought a natural pregnancy (or even another pregnancy at that matter) was in the cards for us. But here, as I live and breathe and type, I am pregnant.

When we first visited our fertility doctor, we were given about a one percent chance of conceiving naturally. It may have even been less, I don’t fully recall. All I know is that that one tiny percent…I threw it out the window. I cast it away as a never. A not possible. And we dove straight into fertility treatments. And as you all know, they worked. Not right away, but those treatments, all of that money spent, all the tears all the heartache, they brought us our sweet, beautiful miracle baby girls. All my dreams had come true. And it was enough.

However, growing up I had always imagined having three kids. I grew up in a family with three children, and it just seemed like the perfect amount. So when the girls turned one, Nick and I had a discussion and agreed to try for one more baby. We were going to TRY to expand our family. We knew it was a long shot, and I promised that if in the end, we were still a family of four, that I would be OK. Because they were ENOUGH. 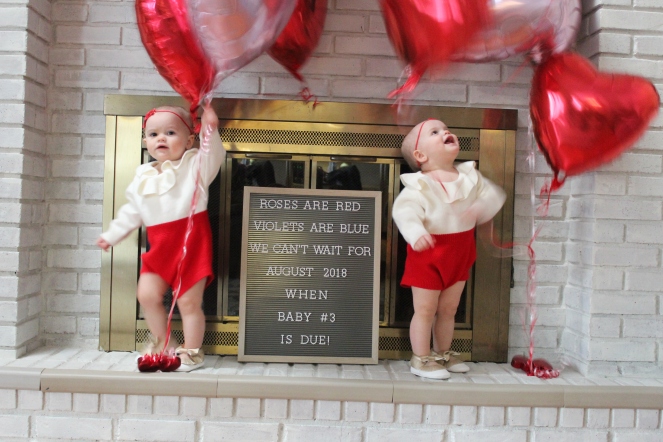 But I knew a part of me would always wonder, “what if”, if we never tried. I figured we would try naturally for about a year, and then try some fertility treatments. But IVF wasn’t really an option, at least not for the foreseeable future. After all, we spent a LOT of money the first time around, and had just bought a new house and a new car. We didn’t have $12-15k+ to spend on IVF again. And that would be assuming it worked the first time around. So, while I was very excited to try, I had VERY low expectations.

I had my first post-partum period exactly 29 days after I stopped nursing the girls on their first birthday. For me, that was amazing! My cycles had always been 34+ days, so 29 days was astonishing. We “tried” between my stopping nursing and that first cycle, I was REALLY hoping that if we could catch that first egg it would be perfect. No such luck there.

The first cycle after 22 months without a period is NO JOKE. Holy cramps, holy murder scene, holy hormones. It was a rager (I know, TMI, but pretty much everything about TTC is TMI, right?). I stocked up on OPKs, pregnancy tests and began to track my cycle again. Except, I couldn’t temp accurately because I was up at least once a night due to the twins’ sleep regression. So I put all my TTC eggs in the OPK basket. It looked like I ovulated around day 23. Pretty typical for me.

Once I reached day 40 with no period, I allowed myself to get kind of excited. I was “late”. Maybe this was it?? When trying for the girls, I was almost never late. Maybe one day once or twice. But there I sat, staring at my stark white pregnancy test. And all of the emotions and heartache and disappointment came flooding back. It was like they never left. And If I’m being completely honest, I don’t think they ever did. Once infertile, always infertile. It is a time in your life that you never quite get past.

So, because I am always one who needs to try something “new” each cycle. I did a bit of research on some vitamins I could add to my diet, and came across Vitex (more on this in a future post). From what I had read, it could help to shorten and regulate women with long, irregular cycles. Sounded perfect for me. Reviews said it would take about 3 months to make any real difference, but with a small price tag what did I have to lose?

It was that cycle, that I got pregnant. The SECOND real cycle postpartum. I bet you are as shocked as I was! I ovulated 3-4 days earlier than usual, and took a pregnancy test the day before Christmas eve. At that point, I was a couple days “late” but didn’t think anything of it. I took the test because I knew I would be drinking wine and mimosas galore over the Christmas holiday.

Nick ran out to pick up breakfast for me and the girls, and while he was gone I mustered up the courage to take a test. I watched the control line change to pink but the rest of the test remained white. I cursed, I cried, and asked God why he was getting my hopes up (like it was His fault?). I washed my hands and came back to the test to throw it away, and that is when I saw it. A second, pink line. HOLY CRAP. Was I imagining things? Was this really happening to me? No way!! But there it was, as real as could be. I dug through my bathroom cupboards and found an old digital pregnancy test that was expired, but I took it any way. And that was positive too!! 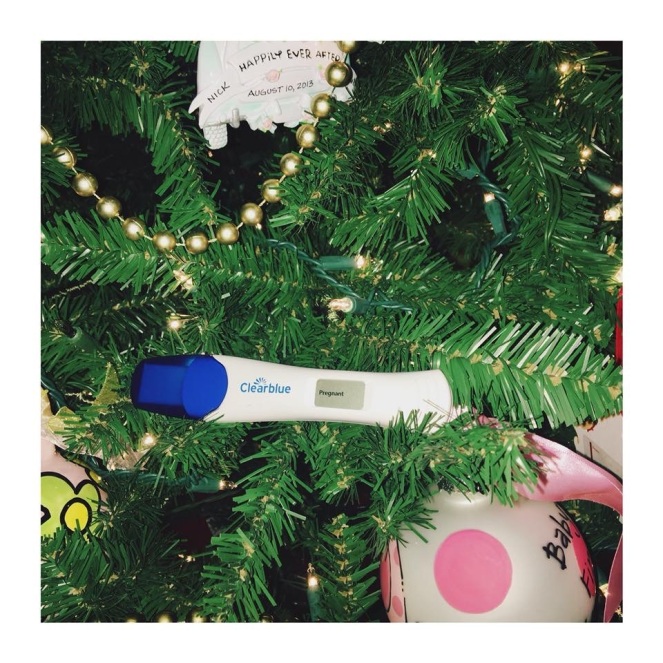 I quickly thought of a way to surprise Nick before he got home. The twins’ Advent calendar! It was a Santa Claus that hangs on the wall, with a little velvet sack filled with magnetic cotton balls. Each morning they would take turns pulling out a beard ball and sticking it on Santa’s beard. I stuck the test in the bag, and when Nick returned home I told Nick we had to do the Advent calendar before we forgot. Rosie (or was it Leni, haha) pulled the test out and handed it to a confused Nick. It took a minute before he realized what it was (that’s why I took a digital, because two lines on a pee stick would have meant nothing to him) but when he did, boy was he shocked! And excited. And terrified.

We spent the next couple of days surprising our family. This was how I had always imagined pregnancy would be. Surprising family members. Not waiting for scheduled beta tests, when everyone already knew the date we would “find out”. It was so exciting. 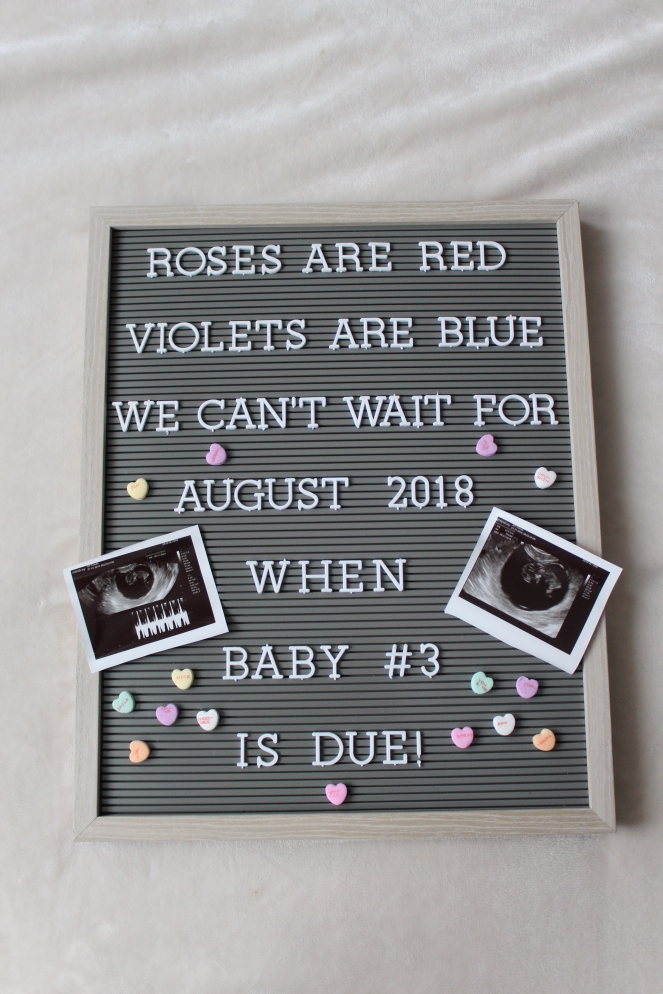 Fast forward to today and our announcement. It has not been any easy several weeks, but so far, the pregnancy is progressing perfectly, and the baby is healthy. Which is all we could hope for.

I still question why we are so blessed, when there are so many others out there still trying to have their first child. We are good people, but by no means are we saints. Do we really deserve this miracle? Are we worthy? I am excited, but so saddened and heartbroken for others.

We promise to never take our children, natural or IVF, for granted. And we vow to be the best parents possible, and to love them unconditionally. For we are blessed beyond measure, and for that we will be forever grateful. From 1% chance to 100% miracle. 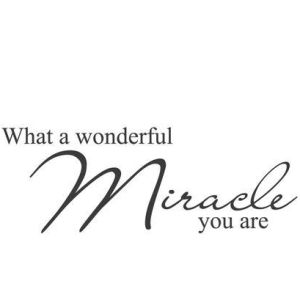 6 thoughts on “A Festivus Miracle!”