February 1, 2016. 11dp5dt. This was test day and I had never been more scared for something in my life. Leading up to the day I had experienced some cramping, and a “lightning bolt” stab of pain in my uterus the day after transfer. I had also hit a blood vessel in my stomach when administering my Lovenox injections so I had a huge bruise and was extremely sore for a few days. Besides that and being a bit sleepier, I had no symptoms. I spent days and nights praying for nausea, sore boobs, anything. But I just felt pretty darn normal!

I worked from home that morning, and took the afternoon off. I knew if I received the same news as last time I would just want to go straight home and cry and binge drink wine. I spent the morning doing work, crying and praying. After having my blood drawn that morning, the nurse had mentioned the results wouldn’t likely come in until after 2pm. My mom and dad were scheduled to come over to keep me company at 1:30pm. I kept my phone clear across the room while I worked so that I wouldn’t keep checking it.

I finally got up to use the restroom around 1:15 and noticed I had a missed text message from my friend who is also my nurse at the clinic. It said “Call the office ASAP, we tried to get ahold of you 🙂 🙂 :)”. Thank GOD for those smiley faces. At that moment I knew the news was positive. My heart was beating a mile a minute as I went outside to call the clinic. They gave me the most amazing news I had ever heard, the word I had been waiting 18 months to hear, POSITIVE. My first beta had come back at 697, and they look for 100! HOLY CRAP!!

After a few screams and some crying, I scheduled my second beta for two days later. Just as I hung up the phone I saw my parents pulling around the corner and into my driveway. I walked right outside and told them the news. I couldn’t contain myself! My mom even had a gift bag of baby stuff in the car because she “had a feeling” (why the heck didn’t I have that feeling??). I then proceeded to go upstairs to the bathroom and pee on a handful of pregnancy tests. Two lines and the digital “Pregnant” showed up right away. I dropped to my knees and thanked God. I then looked at the sticks about 8 million times and pranced down the stairs to show my parents. 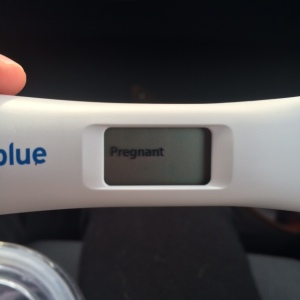 We then decided it would be fun to surprise Nick at work! I loved this idea because I never thought I would get to surprise him, since he knew the info was coming. But we received the news early and had some time. We drove to the store and bought a Congratulations balloon along with two pink and two blue balloons and drove to Nick’s school. He actually called while we were on our way and I had to lie through my teeth. I did a pretty good job and think there might be an acting career in my future. Below is a video of the surprise. I can honestly say it was some of the best few minutes of my life and I am SO glad that I was able to make it this special for Nick.

After Nick had heard the news I took some time to tell a handful of close family members and friends. After all, it was still early days. But for that day, at that very moment, I was PREGNANT.